Optimising your iPod for operas

The iPod is ideal for listening to operas on the move, or on long journeys. It works brilliantly with pop music, but if your preference is for classical music, you need to do a bit of work to make it work in a streamlined way. This article describes one recommended approach, based on several months' experience of using an iPod.

If you simply import an opera CD into iTunes you'll get something like this: 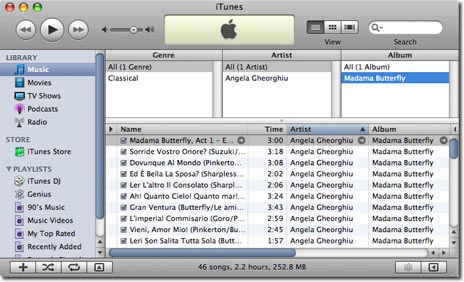 There are several problems with this:

The database iTunes uses to get disc information (called Gracenote) is very inconsistent in its labelling of classical music. If you keep to the default labelling your music library will be a mess.

Another problem with leaving the tracks as separate files is that, with the MP3 format, a noticeable gap can occur in continuous music between files.

Before importing the CD highlight all the tracks in Act 1 of the opera and choose Join CD Tracks from the Advanced menu. Repeat this for the other acts. If an act is split over two or more discs, join the tracks for that act on each disc. The iTunes window shows the tracks you have joined linked with a bracket: 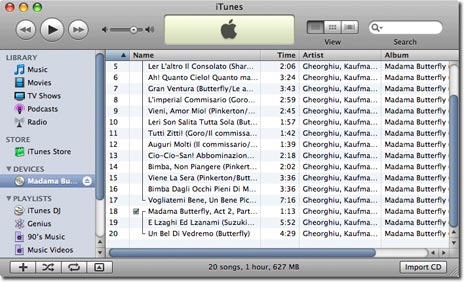 Now import the CD. Each act will now be imported as a single, continuous track.

Now select each track in turn and choose Get Info from the File menu. Relabel the tracks as follows: 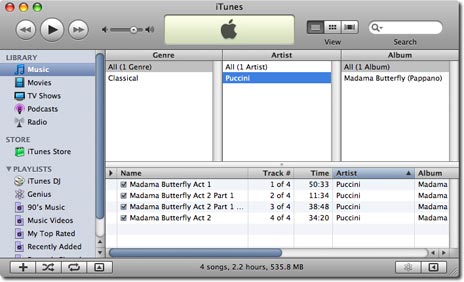 Note that I've chosen to show the track number in the iTunes window. Remember to sort by Artist before uploading the music to your iPod, or the tracks will play in the wrong order.