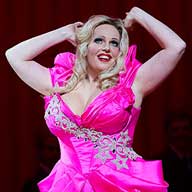 Anna Nicole is a controversial new opera about the young Playboy model Anna Nicole Smith who married a billionaire in his eighties and died tragically young of an accidental drug overdose in 2007.

Composed by Mark-Anthony Turnage (composer of Greek and The Silver Tassie) and with a libretto by Richard Thomas (who wrote Jerry Springer: The Opera), it is an obscene, funny, and ultimately bleak story about a small town girl's search for celebrity.

The opera sold out at its premiere at Covent Garden in February 2011, and is now available on DVD.